Santa Claus is Comin' to Town! 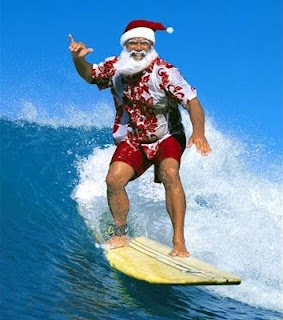 Well, we barely gulped down the last of the left-over Thanksgiving turkey sandwiches, when we became urgently aware that the Christmas/Hanukah/Kwanza/Ubangi Stomp/Rahmadan/Merry Merry Mistletoe and all that is in full swing! I, myself, fell into the hypnotic, holiday haze and, within a blink of an eye, I brought home a wonderful Noble Fir Christmas Tree, lit it, decorated it and basked in its beauty.

And then, as if scripted by Holly-wood, the snow came and the pastures were covered in white...(mostly sleet really, but that's a minor detail). NO GLOBAL WARMING in my immediate view.

Our wonderful Main Street in Our Beautiful Village, is adorned with wreaths and bows and you can catch the glimmer of Christmas tree lights through the windows of the houses as you drive by. You can sense the anticipation in the eyes of the children, curious and excited over what Santa will bring this year. (In some cases, if anything...).

Even if Santa does arrive, no need to be fast asleep as he comes down the chimney. You won't recognize him. As I am told, he will arrive, sporting some beach shorts and tank top. Oh, and that big, fluffy, white beard, gone. Just too hot! Ya might not want to stand in line for your little ones to sit on his lap this year because he's gonna be all sweaty and probably not smell too good. And really, why traumatize any child to sit on Ol' St. Nick's hairy legs! All this GLOBAL WARMING has altered the North pole and Christmas as we know it may well be in jeopardy, on many levels.

First off, I hear tell Santa availed himself to the Cash for Clunkers deal and swapped out the old sleigh for a new SUV; (Santa's Ultimate Vehicle). No ice, no sleigh. The reindeer are out to pasture, hoping for a bail-out. Even Rudolph's nose has gone "green". Isn't there a Czar out there somewhere that can turn this thing around? Poor old Bing Crosby must be twisting in his grave at the thought of his eternal treasure of a Christmas song being changed into "I'm Dreaming of a Green Christmas"!

Just who do we think we are that we can question the forces of nature, let alone substantially alter them? The planet Earth has been around longer than all of us, except that old man that hit my car, and it seems to have taken care of itself without help. I don't recycle and waste my time with bottles and cans and paper; that's what dumpster divers are for. Besides, if I were going to recycle, it would involve a plastic surgeon and anesthesia.

Well, I suppose I have sufficiently stuffed my stocking with enough cynicism for now. I'm going to go back and stare at my Noble fir, have some hot chocolate and pet my Dawg.

Have a wonderful Holiday season! And even though they say we are afflicted with Global Warming, where I come from, you can leave your hat on!

COPYRIGHT PENDING
Posted by Mayor of Chappell Hill at 7:13 PM