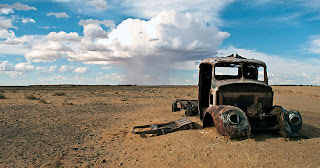 There's an old sayin' "Long summer without rain". It means different things depending on the context. For those of us living in our Beautiful Village, it is quite literal. Trees are dying, even the commercially irrigated ones, and the land is so dry its practically barren in some places. Average temperatures have been well into the 100's for more than two months now. And the heat index even higher, 105-110°.

Seems like alot is drying up, in the landscape of our Lovely Community as well as the seemingly Evergreen Landscape of our Nation's Lawn. Things once alive and well, made worse by the Drought, now being pulled up by their their withering roots, like unemployed auto workers. All the hope and promise will die on the vine, and the next elixir or snake oil won't make anything grow, no matter how much "watering" gets done.

Gardeners will become rich and most of us won't be able to afford Re-Landscaping. We'll probably have to try to do it ourselves and run the risk of getting sick from the heat. With some luck, we'll have a friendly neighbor nearby with some ice water to soothe our scorched throats and burnt skin. Its good to know who your neighbors are, and for that matter who they aren't, you just never know how far this can go, this Drought, and we all know that the longer the Land is stressed, the more likely an opportunity for a GRASSFIRE. In some places, crops are frequently burned intentionally to kill off the weeds, bol weevils, grasshoppers and insects to eliminate pests and promote proper growth.

Perhaps next go-round, we should put a Weatherman on the ballot...not necessarily a Meterologist, that's just too elite. No, just a good old fashioned Weatherman, totin' a Farmer's Almanac. Seems predicting the weather is a somewhat more "exact" science than predicting the Atmospheric Conditions in our Guvmint and the wind-shears and the pop-up twisters that exist there.

Contrary to the empty promises of "Blue Skies" as far as the eye can see we hear so much of, the Weatherman will say with considerably more dignity, honesty and reliabily, "20% chaince of rain with partly (not to be confused with party) sunny skies, Tuesday, 30% with thunderstorms likely in the evening".

Ya know, now that gives ya some time to get your livestock and equipment moved and such. I think I'd rather listen to the Weatherman than some bloated dignitary tellin' me how its gonna be. Shoot, Bang! All you really have to do is look out your window or walk outside to get the view of it; use your noodle, assuming its not overcooked. Its "right there",as I tell my Bird Dawg. He uses his nose and finds it everytime.

Seems the forecast in our Nation's capital of late is almost never good and I don't know anybody who appreciates havin' to scramble with little, very little, notice that the weather is going to CHANGE, dramatically.

I am reminded of the Wizard Of Oz; those poor folks hunkered down in the storm cellar with their potatos and such while Dorothy braves the impending storm for her beloved pet. Then it comes, the Big Twister and some weird, wild-eyed woman pumpin' those bicycle peddles with "dawgged" determination, "And your little Dawg, too!" All in pursuit of those RED shoes! (who wears those kinda shoes anyway? they cramp your feet and will leave you crippled. Best to go with a nice, attractive FLAT).

'Course, that whole saga began when a House fell and a glass of water melted the threat. But I digress.

Anyway, GRASSFIRE can be a force to be reckoned with because it can result in a HOUSE-a-fire! And I guess its better than being stuck in a storm cellar eating potatos, hoping the storm will pass.

We could sure use some rain, the real kind.

COPYRIGHT PENDING
Posted by Mayor of Chappell Hill at 8:38 PM