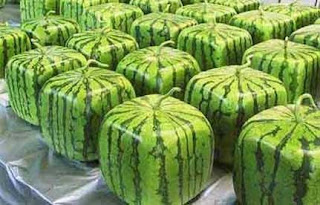 Of late, it has come to my attention that along the asphalt pathway to our lovely community, (otherwise known as Highway 290), we have many more Watermelon Vendors than ever before. Of course "ever" assumes a lot since during the last depression, AKA The Great "Water Melon Depression" (WMD not to be confused with the WPA) the price of Watermelon was undoubtedly controlled by the FDR Administration. Just like today, the "Big Melons" are protected by the GuvMint while the small ones are spit out like seeds on the side of the road. But back to the current depression, the 'back of the pick-up' Vendors keep a polite distance from each other, respecting the other's space, (much like the starling birds packed "wing to wing" on a wire just before their migration south on a fall evening gathered around busy intersections all over the west side of the Big How-Town,) thus providing their adoring customers ample opportunity to slide to the side, inspect, thump and purchase the melon of their choice.


Serious competition. Some Watermelon Vendors have become quite creative in their marketing of this juicy, summertime melon; out-manuvering the competition by moving to the other side of the asphalt pathway in the afternoon to catch the evening commuters. Clever. Madison Avenue would be proud.
Especially of the Vendors hawking additional products such as tomatoes and the ever-present berries. Nothing wrong with thinking outside the box...or in this case, outside the bed of the truck.

But I must say, there they sit in this heat, with their beach chairs and umbrellas and Watermelons. This kind of heat melts memory and vigor much like butter on a BBQ pit and as such, Chappell Hill looks more like the Golan Heights in the deserts of Israel than the verdant hamlet so often covered by Texas Highway magazine and other media. But who can blame a guy for doing whatever to make a buck these days...well, not really whatever, but Watermelon, far as I know, is still pretty wholesome, and hey, what would July be without Watermelon!

In our wonderful Nation, Watermelon transends all cultural boundaries. From the White House to the itty-bitty grocery stores, banks and merchants, almost eveybody sports a Watermelon and there is seldom a complaint.

Having said that, I do have to wonder how those fellas on the asphalt pathway feel about it...what is this "bumper-to-bumper" crop of Watermelon doing to the price they're getting? Is Our Fearless Leader and Congress going to have to bail them out as well? Might be another pet project or The Socialization of Watermelon Small Business vendors.

At any rate, be careful in "them waters"(melons)...cars are slipping to the side impulsively to grab their Watermelon and without alot of warning.

I am reminded, as a child, the local swimmin' pool would have a "Fun Day" for us kids. One of the games we played, to the hilarious delight of the adults who saw it coming, the "Lifeguard" would get a large Watermelon and grease it with Crisco, throw it into the pool and blow the whistle signaling the children to "go for it". Whoever captured the Watermelon won a ribbon and a Fudge Ice Cream Bar.

Now, trying to grab a greased Watermelon in the deep end of a swimmin' pool is just about impossible. Most of the time, the Lifeguard would have to come fish us exhausted kids out of the pool and then go get The Big Net for the Watermelon.

So, if you are so inclined to pull over for a melon on our the asphalt pathway, just remember one of the chants from my cheerleading days, when I was young and limber;

'Course, we were always ahead in the game when we used that cheer. But be careful of those cars suddenly stopping...you don't want to get hit (on)! Although I'm sure our Fearless Leader already knows who's behind is whose. Those G8 summits are so productive.

COPYRIGHT PENDING
Posted by Mayor of Chappell Hill at 9:29 PM