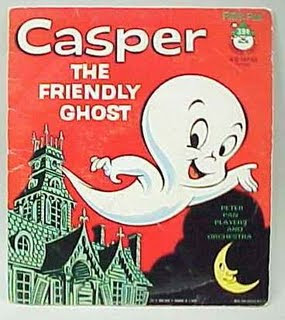 The time is nigh. Halloween is upon us and folks are figurin' out what to wear to the costume party. So, in the "spirit" of the season, might we bow and recall that on this occasion, it is 70 years ago that our beloved CHAPPELL HILL CAFE came to be and has provided our LOVELY VILLAGE with cheerful smiles, good food and the small town barometer of who's good and who's bad! If ever in doubt, "Are you a Good Witch or a Bad Witch?" take a seat at 70 our beloved CHAPPELL HILL CAFE and you will soon know. It will be apparent by the temperature of your coffee and how high the waitresses have arched their backs.

Now, I'm informed that 70 our beloved CHAPPELL HILL CAFE ,is, in fact, HAUNTED! A ghost's movements are captured in a framed picture that is hung on a wall of the Cafe wandering the restaurant. A friendly ghost, called "Floyd", fondly so it would seem, making sure Mikey was tending the books properly and keepin' customers satisfied. Meanwhile Floyd's keepin' the waitresses somewhat nervous. Our DEAR FRIEND EMILY (AKA Sissy) has made peace with this phantom and they have come to an understanding as to the mutual beneficial interest in the continuing success of the Cafe and marking Big Mike's behavior.

When all this came to light last Sunday after church, our collective souls proportionally saved, all things considered, the scutter began.

"Pass the salt, and we need more butter" could be heard around the nearby tables as the tales were told. Turns out, there are more than a few haunted places in OUR LOVELY VILLAGE. Eyes began to dart downwards and people were speaking in whisper. Some claim to have video surveillance tape of a ghost haunting a well known bank, and a house of fine repute, graced with TLC and refinement but sports a ghost.

I can't blame the dead. I love it here in our Lovely Village Respecting Chickens. We have more churches per capita than most towns and no shortage of cemeteries. Fertile grounds for those who prefer sheets to a pair of Wranglers. If I were a ghost, rather than a ghost writer, I'd stick around and would dang sure be rattling chains in somebody's attic. I even wrote, as a ghost writer, for a time for two retired OSHA attorneys with several publications including Chain Link Fence Monthly. It took every bit of my creativity to make that subject interesting. You could say I was the "GHOSTESS WITH THE MOSTESS".

There's a difference between being haunted and hosting a ghost. One just follows you around and the other makes you crazy for your Dirty Deeds. Either way, its a ghost and you have to come to terms with your own special spector. Its not enough to throw a white sheet over it and call it Casper.

Stop in at the CHAPPELL HILL CAFE next time your around; say hello to Sissy, Sandra and Kathy and tip your hat to "Floyd". As long as he's around, nobody will be spittin' in your tea, least not out loud! And he's keepin' Mike in line, maybe even a straight one on occasion. Emily has a friend in poor old Floyd and in spite of claims of the "super"-"natural", she is loved by all.

Posted by Mayor of Chappell Hill at 8:41 PM