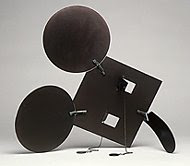 Burgers, Banking and Gas... a trio of life's experiences of which most of us are familiar. If your lucky, first, it is the burger of your choice, ("the way you like it"), second, a strong, steadfast, friendly bank and third, somebody else's gas, which you can quickly move away from at early notice with no penalty for early withdrawal.

Now, we cannot deny the arrival and the periodic convenience of the new Shell station at the corner. You can have a bag of fries in one hand and a deposit slip in the other, all while you get fueled up (so to speak).

Seems easy. Kill three birds with one stone. But since we are speaking of trios, are we aware that this, shall we say, the "strip-center", all purpose site is the brainchild of three men, married to three sisters, one sister of some local import.

One noted resident remarked that when approaching the Village from the east at dusk, the silhouette of the glittering, action-based multi tenant sign at the Shell station reminds one of the Claes Oldenburg sculpture of Mickey Mouse "deposited" in front of the Main Library in Downtown How-Town. Hmmm...of mice and men.
At any rate, it is there. It is permanent and it has forever altered the landscape of our wonderful community. No longer can we roll up the sidewalks at dark-thirty and recede into our quiet privacy and dodge, artfully, the exact type of intrusion many sought to escape from the hyper-consumerism of the big towns.

In fact recently, the guest speaker at a recent civic event, an astronaut, mentioned that the intersection of 1155 and 290 has been added to the short list of "visible locations on earth at night" from the orbiting space station. Chappell hill is now in the company of Paris, Rio De Janeiro during Carnival and the gas flares, (pardon the pun) of the Gahwar field in the Empty Quarter of Saudi Arabia.

Well, anyway, the place seems to be okay. That is if you can curl up to having a big mole on your chin. (Hey!...Cindy Crawford calls hers a "beauty mark"). We should hope the burger spot at the corner will cease and desist allowing their dumpster to illegally serve the teaming millions, a clear misinterpretation of the competitors original slogan, "Over a million served". Even the weekend motorcycle riders had to park away from the over-flowing dumpster to escape the stench.

Sadly, the only place they had to park was blocking the drive through lane at the new bank.

Divine retribution in some minds.

Things tend to pan out the way they're supposed to. We'll just have to wait and see. There will always be a schism between those who want change and progress and those who fervently fight for the preservation of the "The Way We Were" and the respect for actual history. (Just take a look at our Nation's Constitution).

Both views are worth considering. But does it not provide an opportunity to ask yourself important questions, challenge yourself on your beliefs and hopefully emerge with a more defined idea of who and what we want to be, as individuals and as a community? Whether or not you are "Shell Shocked" and disagree with the burger joint's presence, remember, we are neighbors, so don't get mad if your see someone you know slinking out of the burger joint...trust me, the burger will disagree with your friend better than you can. And as a well respected, small town physician used to say, "Don't worry, the feeling will pass".

COPYRIGHT PENDING
Posted by Mayor of Chappell Hill at 6:32 PM