Small Change: The Dawnings, The Yawnings and The Awnings 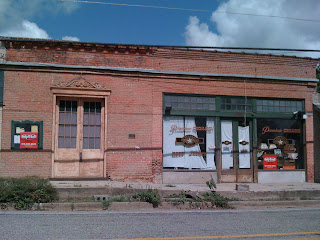 The early mornings in our lovely Village glisten with the kiss of sunlight and history, a history wrought with war, a women's college and a downtown that just won't die quietly. Many of us regard the Village as a treasure, perhaps even a National Treasure. Given the recent "interest" in our lovely town, from far and wide, you'd have to be taking long siestas under the Brazos River Bridge to not bear witness to some "changes" that have recently befallen Main Street.

Now, "Change" is not necessarily a bad thing...ask any woman over 50. Its not easy, but it happens. The question is about BALANCE.

Change in Chappell Hill has become a more frequent event than the nations "top" Banksters holding out their tin cups before a spineless congress for the People's (and their grandchildrens') largess(t). Some of the changes have been good and others, well ask the Banksters.

Our charming Main Street is "changing". What happened to the Awnings that once adorned the old buildings? Will they be replaced, renewed, or I dunno, re-elected/erected?

Have we become complaisant to the value of history or perhaps sadly, just tired of it? Or is this just more "CHANGE WE CAN BELIEVE IN".

A most regarded and respected resident remarks that once landscape and architecture is altered it could require a somewhat heroic effort to restore an adversely impacted land-mark to its original design character without considerable care and cost.

For instance, take the Constitution and the Bill of Rights of our great country. Think about all the CHANGES it has been through. As our Founding Fathers are spinning in their graves watching the ticker-tape of Czar-town morphing from a Republic to a Banana Split Republic, one can hear the whispers of warning drowning silent the past acts of Patriots. It required bravery, faith in mankind, dedication, sacrifice and open-mindedness to create such documents; but I doubt any of those fine men would sit by and be satisfied with the bunch of us asleep at the switch, dozing and yawning, only to awaken, dizzy-headed enough to complain about these CHANGES.

What we can't change is nature, Mother Nature, that is, and according to the Farmer's Almanac, we're in for a hot, dry summer where the only "rain" we are likely to see will be that of Federal Reserve notes pouring down on the Nation like confetti on a national championship parade, the dawning of a "new age".

Try not to become the proverbial Cat On A Hot Tin Roof particularly on a cigar store awning. Simmer down, sip some lemonade and think about what, and how much, you want things to change. Take in the beautiful dawnings we have out here, yawning if you have to, but combine it with a good morning stretch, and as for the awnings, I guess we'll have wait and see whether they symbolize something far greater, like, well "change". It is, after all, still unfolding.

I suppose looked at another way, rather than an horiffic expression in Spanish or a moment in the earth's rotation, Dawn is just another case of "close but no cigar"...

The "Dawn" always brings something to wonder about.In the words of Mae West, "Step aside small change before I spend ya".

COPYRIGHT PENDING
Posted by Mayor of Chappell Hill at 9:00 PM