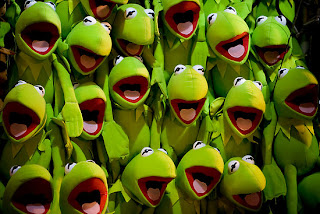 Once upon a time, 'green' was a simple idea. When most of us were comin' up, there was only one green in the Crayola box. We were spared from the confusion, frustration and anxiety of having to discern the difference between Blue Green, Hunter Green, Fir Green, Olive Green, Lime Green, Grass Green, Green Shoots and so on.

Back then, the only words of warning and wisdom about 'green' were delivered in terms like Green with Envy, The Green Eyed Monster, "Don't get on that horse, he's only Green Broke ( which is a couple of bucks short of being broke) and that slimy stuff on whatever it was in the refrigerator that was too old to eat.

Then things changed. Plopped down in front of the color TV, us kids found a deep and abiding affection for Kermit the Frog, a charming, yet woe-begone little green frog with a heart frought with unrequited love for Miss Piggy (a diva-bankster, truly a Material Pig), through Sesame Street and sang along to the sit-com music of Green Acres. And who can forget that first or second guitar lesson where we learned the first few chords of GreenSleeves, which endures even today.

And while some of us felt empathy for poor little Kermit when he crooned "It's Not Easy Being Green" little did we know, or could even imagine, just how true his lament was to become in the case of the current Green Czarist Incarnation.

Today we find ourselves not only still befuddled by the different shades of green, but our Fearless Leader and Champion of Change has provided our country with, what does He call it, The Czar of Green Jobs? If we were to actually have a viable job market not attached to some dwindling life support system, we could call it a Green Jobs Bizarre! Used to be, green jobs meant mowing the lawn or pruning the trees, planting a vegetable garden...honest, wholesome work that would earn you a green back.

Now, not to put too fine a point on it, first off, I'm kinda uncomfortable with this whole Czar thing...(or in this case, this A**hole Czar thing). Do we really need Czars green or otherwise? More importantly, do we need or want such a Czar clearly crippled with the lack of articulation and a pronounced dependence on profanity and vulgarity when referring to others? How does such a person ascend to such a position within the Administration of Complete Salvation and Redemption, Oh, and "CHANGE". Perhaps he has climbed the political ladder or alternatively the proverbial (GREEN) Bean Stalk that Jack did. (No offense intended to JFK).

In our Nation's capital, will we soon be calling the house on Pennsylvania Ave. the GREEN HOUSE? Could this be part of the Green House Effect or is it the source of it?

Kermit was right. It's Not Easy Being Green! And now, our young school children are not struggling over which green Crayon to pull from the box but are further charged with sign painting flattering images of The Fearless Leader, composing letters to themselves on "How Can I Help The President" and memorizing the words to insipid sing-along songs exhaulting the President.

An old cowboy once said "I don't buy green bananas". Good advice it would seem in retrospect. Thankfully, in our Lovely Village, we tend to understand that being green is alot more about protecting our children, preserving our Constitutional rights, standing up for what's right and barking at that which is wrong. Perhaps the Crayola folks can come up with a new color for the box; True Blue-Green.

Listen carefully to what's goin' on. All that glitters is not GREEN!

P.S. Whatever happened to Mr. GREENspam?
COPYRIGHT PENDING
Posted by Mayor of Chappell Hill at 8:24 PM