THE ORDER OF THE ARROW 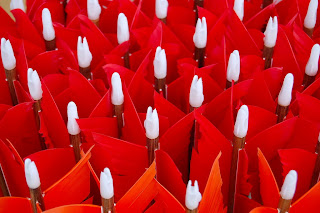 Not much in this life is more wonderful than a good night's sleep. It slips between our fingers as we age and we sleeplessly worry over a myriad of circumstances and concerns that occupy our lives and our minds. We toss and turn and finally surrender to the break of day and trudge forth again through our somewhat regular routine looking forward to the soft pillow to rest our heads upon when the day is done, and then, again move forward with an odd Blue Plate Special Combo of Optimism with a Side of Grim Palor.

This past Saturday night, I slept so very well, it was almost a crime. Slumber, peaceful sleep and an overall feeling of well-being when I awakened. What, I wondered, was the key to this peaceful sleep!, Can I bottle it, market it and make a fortune? My brow was less furrowed and my teeth less gritted. What was the source of this feeling?, this feeling of that long-gone stranger "HOPE"!

The source was, in a way, the Fountain of Youth. I had the privilege of spending some time with the Boy Scout Troop # 652, bravely camping out in our Lovely Village at the Most Admired Estate of our Neighbor and friend, in an effort to earn their bicycling badge by cycling 25 miles in one day. Also scheduled was an Archery Event, but the inclimate weather shut that part down.

Given the interruption in the programmed events, I figured it would be interesting to visit with these Future Bearers of the Torch Of Freedom about the state of our Nation. Certainly, we can make no mistake how the Boomers and Seniors feel about all this, but the Town Halls and the Tea Parties don't often put their ear to the ground on what the young folks have to say. With all the talk about 'Its about the Children' and 'The Children are our Future', and 'It takes a Village...' Has anybody bothered to ask these fine young kids what they think?! I dusted off the crystal ball and gazed into the minds of the Future Leaders To- Be- In Training. After all, the Boy Scouts is a renowned organization promoting leardership,honesty and responsibility and it would appear that those qualities will be vital to our country.

At first, I paused, and figured I would get a bunch of "I dunno" and "WHATEVER"...BOY was I wrong!

These boys, aged 12-15 years old,( actually on average 13.5 years old, as I was corrected) were not only delightful,well-mannered, informed and well-educated; but more than anxious to be heard about the condition of our country and where its going.

When I began to ask the group some non-leading questions, their individual and collective personalties emerged. None were overly influenced by the others and all seemed to have their feet squarely planted on the ground.

I queried, "What do you like best about coming out to Our Lovely Village? It was a close tie between the scenery, the hills, the variety of road-kill and, oh yeah, the Bluebonnets!

When the topic of discussion focused on more serious issues, I was frankly amazed. These kids KNOW what they're up against. When I asked, "How do you feel about how our goverment system works?" One future torch bearer and his friend gave a friendly punch in the arm to each other and said "Hey, look at us!, We're from different schools. We're rivals! I'm wearing my school shirt and he's wearing his, but we're friends! Why can't the Government work that way?" My heart swelled with the notion that these two can compete and yet find a commonality without rancor.

Daring into deeper issues, the question was how did they forsee themselves repaying the debt accrued by the government, left and waiting for the time when they are young adults and are saddled with the whole mess. How did they feel about the government mortgaging their future with about as much care as a bunch of louts leaving the cracked peanut shells on the bar room floor while feeding themselves on the free pick-up peanuts and washing it down with a cold one. Somebody else will clean it up, right? Some of the scouts were staggered by the numbers but each had a response. Some were very witty and some were rather serious...a range of ideas from "killing all the politicians", "overthrowing the Government", "Texas seceeding" and one comment from no doubt a budding young lawyer who's answer to repaying the debt was,"Simple. Sue the Government". And then there was the scout who clearly had given these topics alot of thought. His facts were correct and he had answers that were cogent and well-delivered. Not surprisingly, this scout is a leader among the troop. Tall, easy on the eye, and an air of professionalism. For a moment I wondered if we had a soon-to-be politician on our hands. So well spoken, and he gave a very straight-foward minor discertation on the evils of Socialism. His position was to stop all government spending and had an expanded view on why Socialism, or in his words, Communism won't work. He said,"A free market can solve problems the government can't". I couldn't resist asking him what he wanted to be when he got through with school. Certain I would hear him placing dubs on some public office, he surpised me. He aims to become a Vegetarian Veternarian. In a confusing way, I felt a little relieved although sharp, bright minds infused into the political arena may be necessary, particulary if the politicians are all killed. I wondered silently how he would cope with the inevitable euthenasia of an animal too badly injured or terminally ill to survive. I surmised he would not indulge in a Death Panel.

We moved on to the topic of End of Life Counseling, and the response was unaminous: "Oh my God, that is SOOO stupid". One young scout of local note declared it wasn't fair for everbody else to pay for "Some bum sitting around watching TV". (I double checked the zipper on my purse to make sure my copy of TV Guide was out of sight!).

We talked about the Cash for Clunkers program, most thought it was a failure, scoffed and laughed at the Cash for Appliances idea and one even suggested a Bucks for Blenders program.

On the issue of the 2nd Amendment, the group became more animated. They were talking mostly all at once on this point but I did catch something about the difference between a bear with a baseball bat and a baby with a spoon. Your guess is as good as mine on that one. And a comparison was made between the innocents having the right to protect and/or defend themselves but that there will always be "malfactors" and banning something only makes it more desirable and will create a dangerous underground market. One pointed out and challenged the others to remember Prohibition and what a huge rebellion it created. I asked if any had read or heard about Speakeasys. One of the younger ones said, "Speakeasy...Yeah that's when your Mom's not yellin' at you". A literal translation, I suppose, but maybe the simple truth in his world.

Anyway, the dicussion trailed off at this point but these young minds were invigorated and they began to bounce their ideas off each other. That made me happy. Its the only place to start with this generation and I hope they will continue to think and exchange ideas and formulate potential solutions for the future that awaits them.

It had been raining most the day and the day before but these guys didn't seem to mind, ankle deep in mud and short of an archery event and no bon-fire. I asked one the adults how they all made it through the rain storms. I was told the young scouts jumped on it and set up camp despite the weather.That's the spirit! As I was leaving, they got back on their bikes for another ride down Old Chappell Hill Road. The 700 or so big-time cyclists attending the annual annual Chappell Hill Bike Ride sponsored by Chappell Hill Bank were gone with their fancy bicycle stuff and their sea of spandex and brightly colored helmets that sort of make them look like a carton of Easter eggs. These young scouts didn't mind, even the one in second-hand tennis shoes with the 25 cent price tag still stuck to the toe. They carried on beaming smiles and echoing laughter and jokes and a little bit of "What's for supper?". Knowing the Host of this event, I'm sure it had something to do with Fajitas, and alot of it, painstakingly grilled, in the rain, in his lean-to smokehouse. A round of applause for the tireless Host and his fellow Troop Leaders/Volunteers!

I really did sleep well that night. With a deep sigh of relaxation I thought, ya know?...there is hope for our civilzation, society, especially with such bright, intellegent and strong young boys like the ones I met from Troop 652, poised to inherit the future. Us older ones should have confidence and reassurance in the eventual passing of the Torch of Freedom and Protection of our Constitutional Rights to individuals such as these. Far as I could see, these are capable hands, thinking, paying attention and straight as an arrow. When they do get that archery badge, we can proudly call them Arrowheads!

Oh, and if I ever have to pitch a tent in the rain, I want these guys on my side, or at least on my speed dial. I'm sorry their archery match was rained out, but make no mistake about these guys; their AIM is true! And in my book, that's a Bull's Eye!
SUPPORT YOUR LOCAL FIRE DEPARTMENT

COPYRIGHT PENDING
Posted by Mayor of Chappell Hill at 9:08 AM